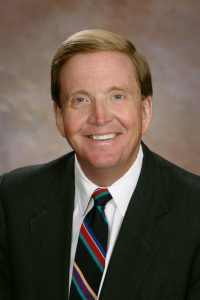 A native of Greenville, he was reared in upstate South Carolina. He was graduated from Spartanburg High School, Clemson University, and The Southern Baptist Theological Seminary – from which he received the Master of Divinity and Doctor of Philosophy degrees. Dr. Andrea has served previously as pastor of the Rock Creek Baptist Church in Westport, Indiana, the Augusta Heights Baptist Church in Greenville, South Carolina, and the First Baptist Church of Savannah, Georgia. In addition to his congregational duties, he has taught seminary courses in pastoral ministries.  Dr. Andrea was awarded the Order of the Palmetto, South Carolina’s highest civilian honor, by Governor Henry McMaster.